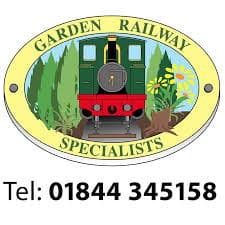 Knuddeistein Station is a Continental Austrian/German layout built from memories of the old Austria. It has a helix at each end, a working coal mine and shed doors. Depending on the time of day, it may be running DCC live steam locomotives with sound or E-locos with sound. If it is running DC, no steam or sound will be present apart from the steam from the coal mine. When running E-locos in DC, they are powered from the overhead catenary – yes it really works! We encourage children to interact. Enjoy this amazing Continental layout! 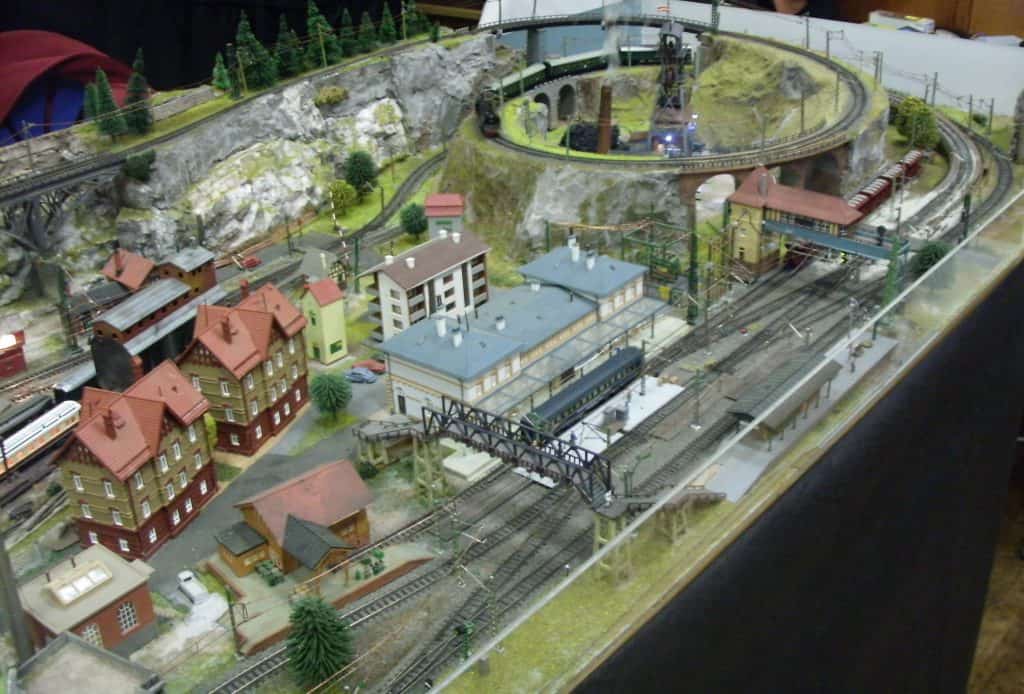 Beckwick Town is a fictitious location situated in Southern England, some 40 miles from London. The line opened in the mid-1880s as the railway network spread throughout the country. The current setting is served by all three types of motive power, set during the post-war years into the mid-1960s.
The station and town boast their own parcels depot to cater for overnight newspaper trains, where sorting can be carried out and forwarded on by road. With regular services to and from London, Beckwick town also plays host to regular cross country and inter-regional services.

The town also benefits from its own short commuter branch, serving nearby Upper Beckwick (or ‘Uppah’ Beck-wick to the locals). The branch was built to serve the western side of town to take advantage of the prevailing winds, and also to serve workers of the soap works and gas works, along with the heavy and light industries situated towards the eastern side of town

We are sure that you will find the busy seaside scene in the Thanet area interesting. A number of easily identifiable features to be found in the locality are included, hence the title. Main line, Branch line, trams and funfair are supported by a variety of detailed incidents to create a happy holiday atmosphere. 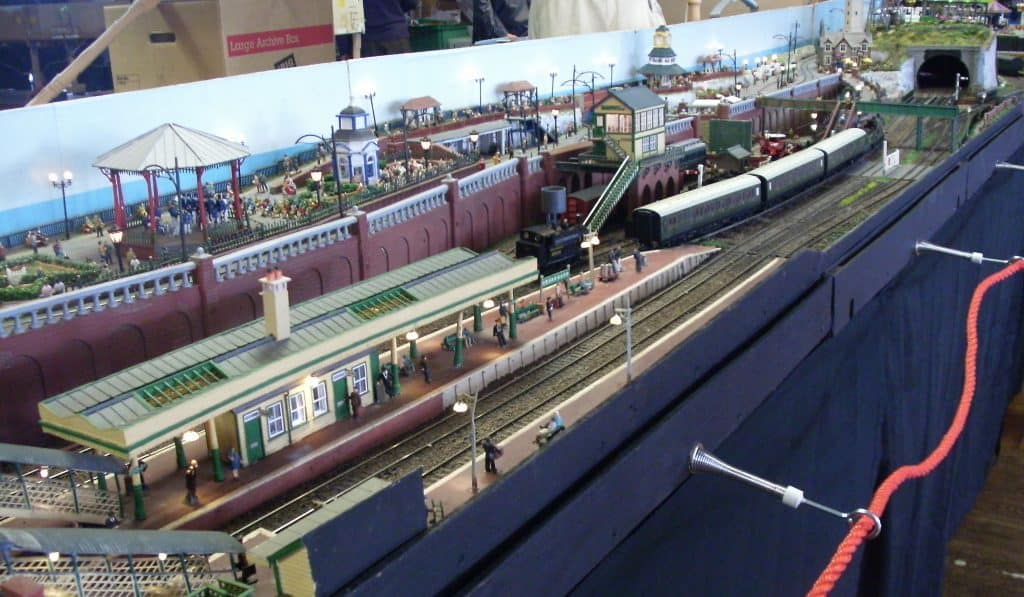 Daisyfield is a class 14X TMD based in Blackburn next to the East Lancashire Coach builders factory. The depot consists of a 2 road maintenance shed and fuel point and train care siding. Regular traction is a Multitude of Pacers in various liveries, some 1St & 2nd Generation DMUs, classes 25, 40 & 47, with the rare visitor of other classes. DCC locos with sound. 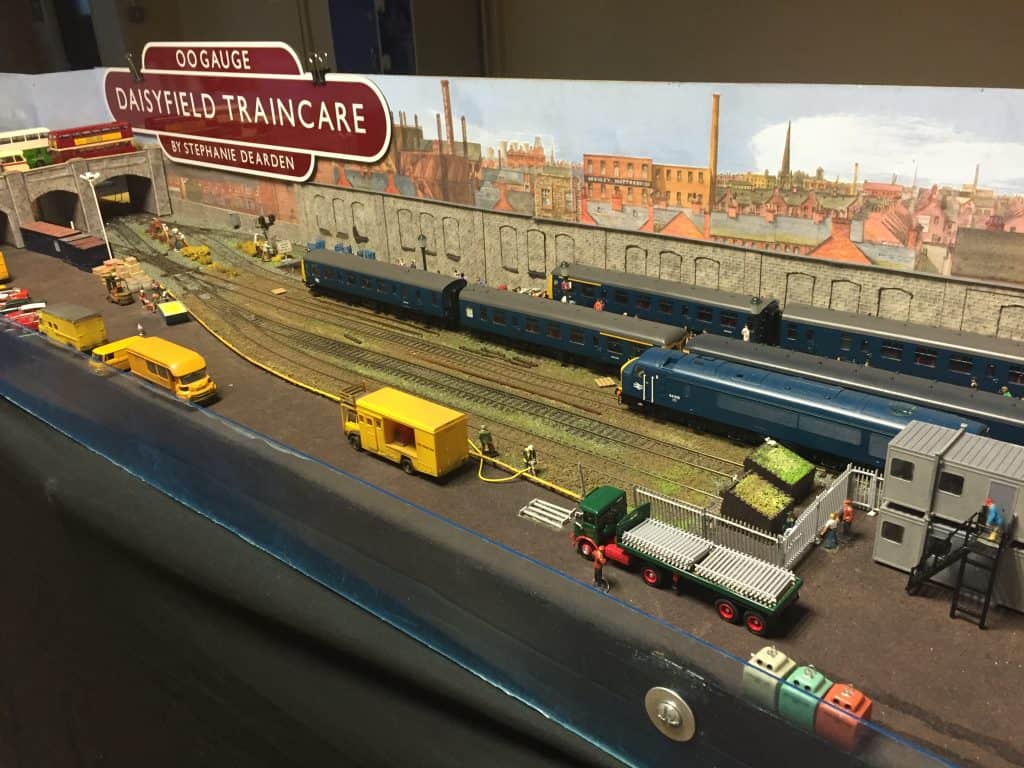 The layout represents a small fictitious goods yard, somewhere in South East London. Time period is the late 1950s early 1960s, near the end of steam, with an occasional diesel also to be seen.

It is still a work-in-progress, construction having occupied members of the 2mm Association Kent & Essex Area Group for many years. It recently underwent a radical rewiring with the switch from DC to DCC.

The track is hand built, using Code 40 rail soldered to PCB sleepers, with etched chairs. Stock is supplied by various group members, and is a mixture of RTR n gauge stock converted to 217S, and kit or scratchbuilt 2mm Finescale models. The buildings have their origins in proprietary kits, but have been modified to suit the area and era. 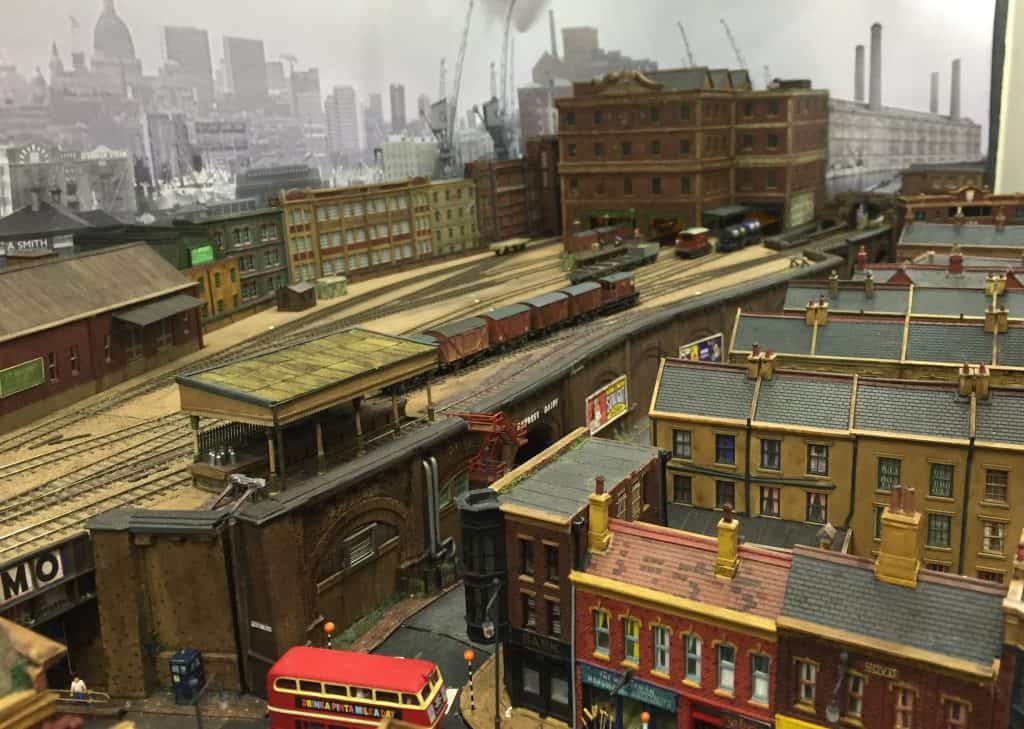 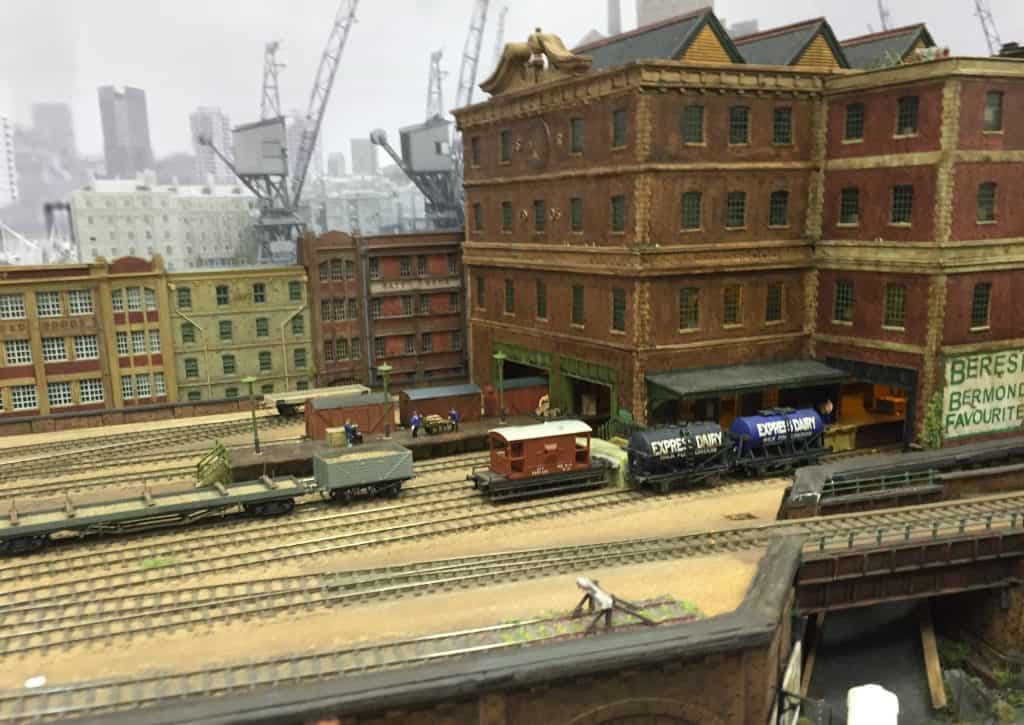 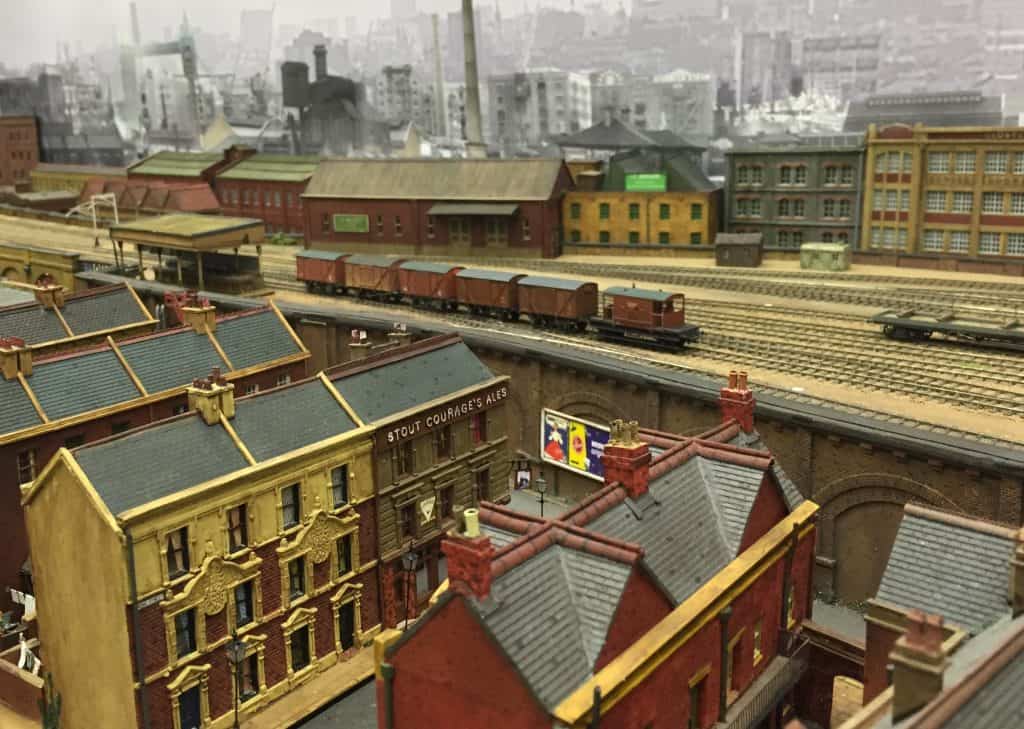 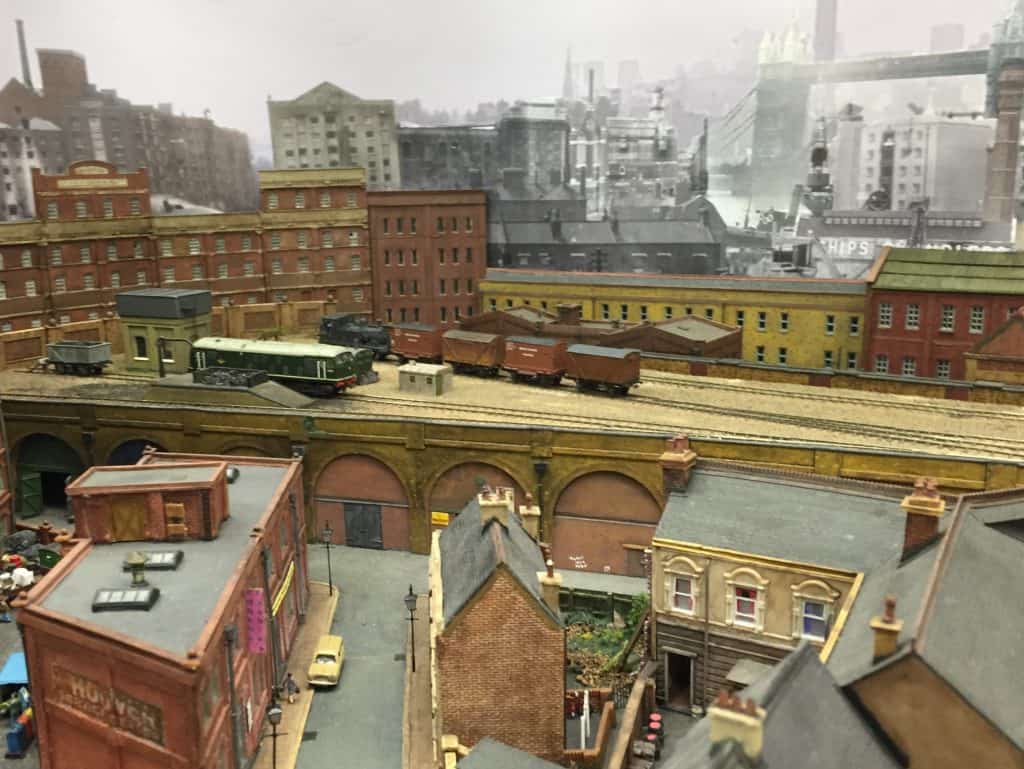 The layout depicts a fictional Engine/Service Shed, incorporating a turntable and coal yard, with a typical suburban station scene on the edge of a sizeable town around the Somerset & Dorset area where engines are watered, coaled and cleaned before being rostered to main line duties. There are a total of 4 control panels aimed at supplying maximum passenger and goods movements at all times.

On entering through a tunnel from the left, ‘Country End’, you will pass the goods shed complex / coal staithes and turntable, whether stopping on the ‘Local’ line, Platform 3 or through on the ‘Main line’ you will enter the station areas Platform 1 & 2.

The station buildings are scratch built to represent the area, as are the Coal Tower, Engine Shed and Workshop, also available is an additional offset Bay, Platform 4, for Push-Pull Shuttles. Upon leaving to the right, you’ll pass the Siding Junction and High Level Station entrance, exiting via a tunnel under the main road. 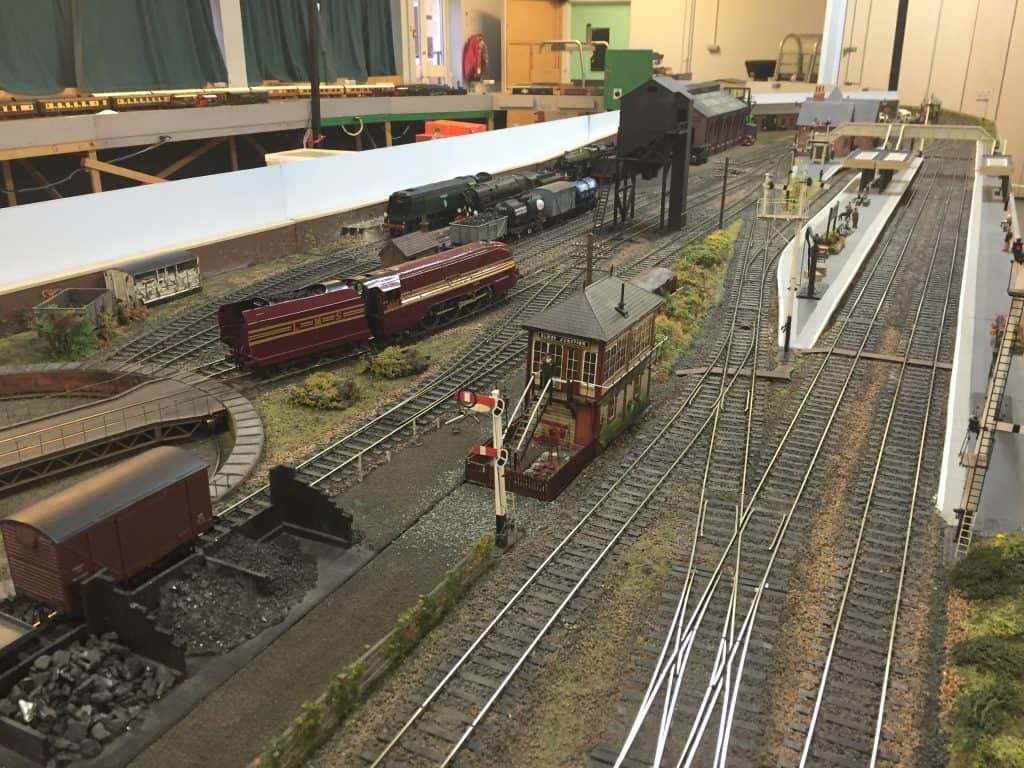 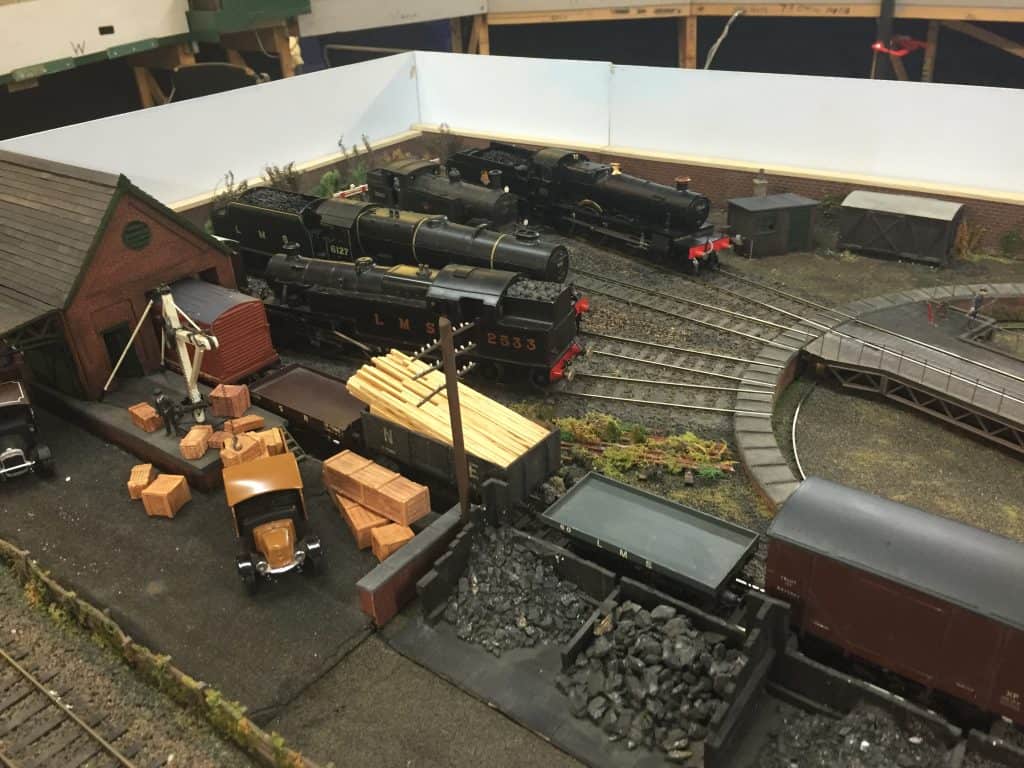 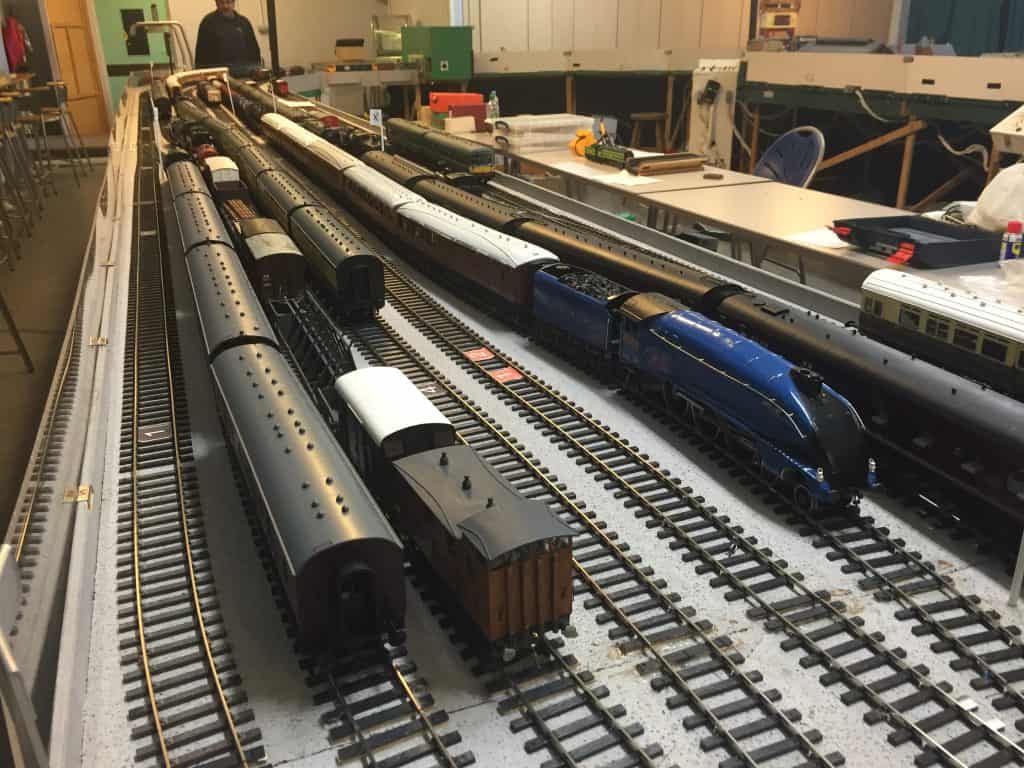 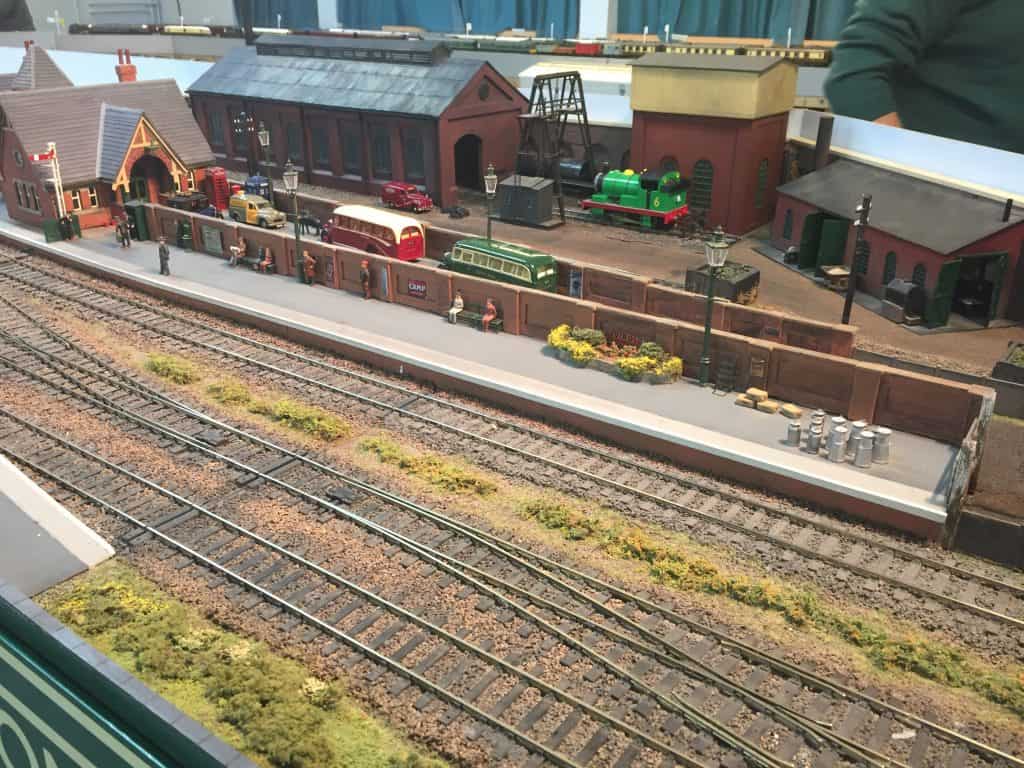 The layout is an attempt to portray the relatively early days of railways in Britain. Typical of the period, locomotives have little footplate protection, and rolling stock is quite small. A railway policeman controls the traffic using the newly invented staff-and-ticket method, which is more suited to a single track line than the earlier time-delay between trains. Can you see the ‘Bobby’ in his tall hat? He still needs to walk around the station to set points, though he does have a hut to shelter in between trains.

The trains are adapted from well-known Homby and other models, and represent types that might have been built in the period 1840 – 1865. 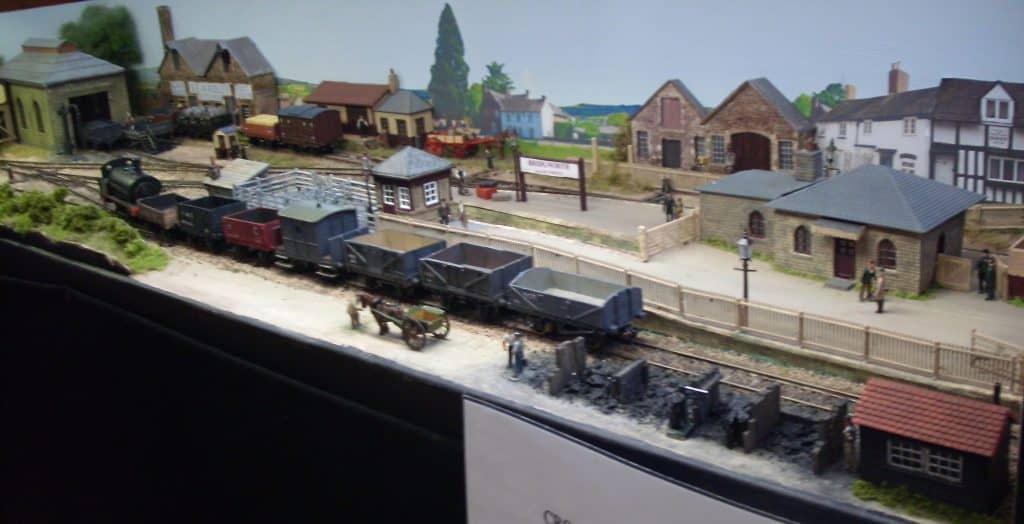 An 0 gauge demonstration shunting layout to display the club’s collection of 0 gauge models.

Tram de Hybouville is a rural steam tramway running from a junction with the SNCF (French National Railway) Coastal Line from Dieppe to le Treport at Bellengreville, crossing the valley floor and the River Eaulne at Pont d’Eaulne before climbing through the Hybouville to St Nicolas d’Aliermont. Other stations are Bellengrevillette, St Sulpice and Hybouville. Pont d’Eaulne et Travaux de Gravier is a halt on the north side and a rail served gravel works and siding on the south side of the River Eaulne. Using real water marks the importance of the river. 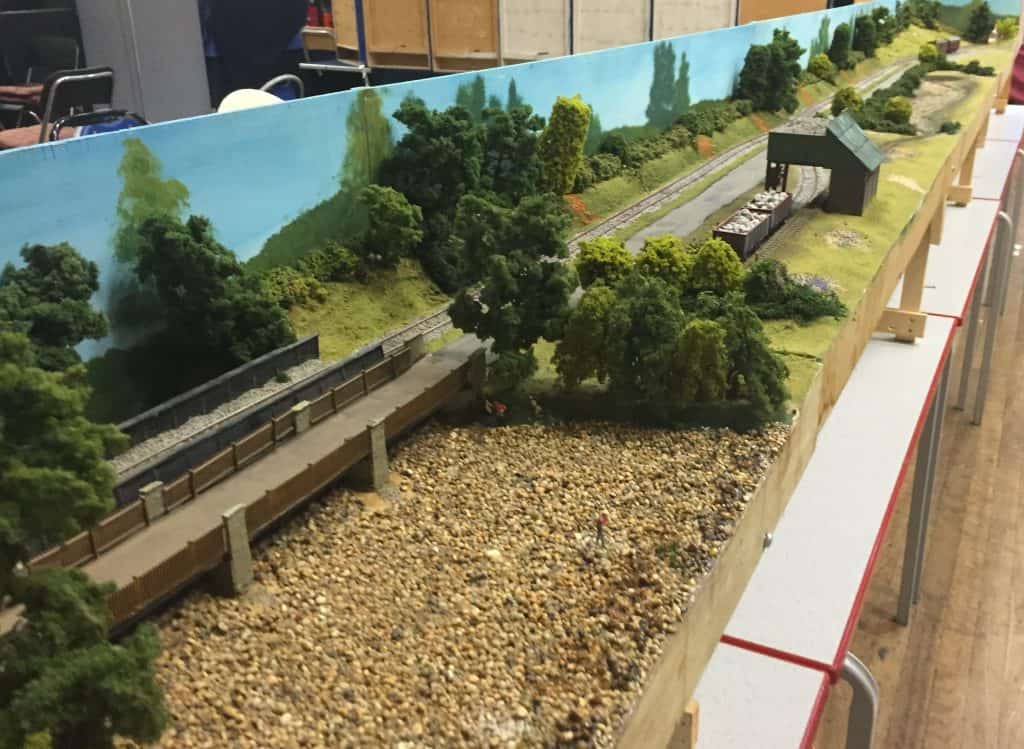 Situated on the beach alongside Madeira Drive in the seaside town of Brighton, the Railway was constructed by Magnus Volk and first opened to the public in 1883, and is still running to this day. The route is approximately one mile along Brighton seafront, with three stations where passengers can board and alight.

Our layout, built by Derek Smith and Noel Dollimore, is intended to convey the flavour of the railway, with sections showing it how it was from the 1970s through to 2016, and has most features of the complete route. The ‘trains’ running on the layout show examples dating from the 1800s (the all-brown cars), the blue and white all-enclosed ‘Winter car’ from the 1920s11930s, to the current semi-open and all-open styles shown in different period liveries.

The ‘trains’ are all designed by Derek, and 3D printed, available from Westgate Models, Derek’s ‘shop’ within Shapeways, a Dutch online 3D printing company from where they, and loads more things, can be purchased.