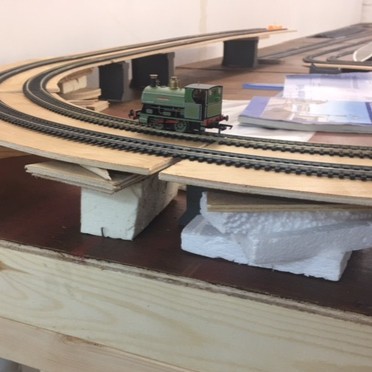 Richard arrived in the afternoon armed with some carefully shaped pices of plywood and proceeded to assemble his first attempt at raising the track to a new level.

What is more, he had the 040 running up and down the track like a dream.

Of course, there were murmurings, from fellow members, about the slope being too much for a 50 wagon train or a Eurostar set. However Richard, sensibly, ignored the input and was delighted that his plan had transferred from paper to plywood to the layout without hesitation, repetition or deviation.